In my previous blog post, I discussed I had been struggling with synthesizing samples that were completely pure. Well, this week I have made some progress, I have finally synthesized some pure samples. It is after synthesizing a total of 26 samples that I finally get 7 pure ones.

I synthesized the first batch of pure samples the week my mentor was out of town. My mentor was travelling to a research conference in the east coast, so she was leaving me unsupervised for a week, but with some lab work assigned. I am not going to lie, I was a bit intimidated, as I had only worked with her close by. Having her close by meant that if I had a problem or a question, I could easily ask for her guidance. However, I was also excited for this independence, as I saw it as an opportunity to test myself.

Throughout the week my mentor was not here, I worked diligently, being very careful and closely following all the directions. However, when the time to check my results came, I realized the x-rays still showed an impurity! I was devastated, it seemed like my hard work hadn’t paid off. However, not wanting to give up, I decided to try one last thing. I had one more day before my mentor came back, so I was going to burn some of the precursors I had left, but this time on a different atmosphere. My first week in the lab, my mentor had done this and it had worked. I gave it a try, I really had nothing to lose. The next day, I was thrilled to see the idea had worked, the x-rays were looking pure. Below is one of those x-rays finally showing a pure disordered rocksalt. 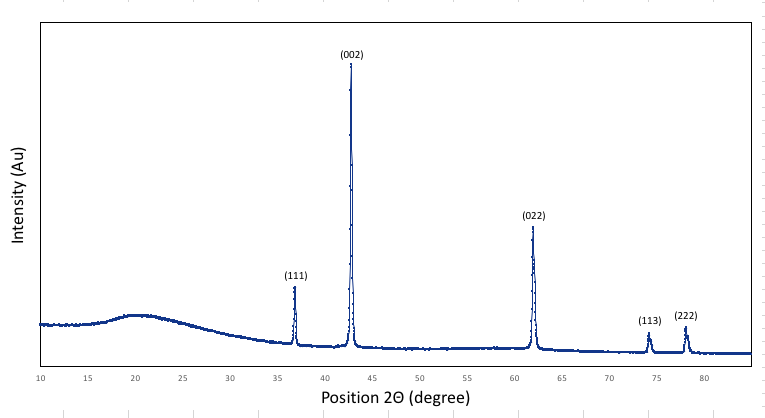 When my mentor came back, she was very pleased with the results. She told me solid state synthesis is very unpredictable, so getting a batch of pure samples was great progress. She decided it was time to move on to the next phase of the process, actually assembling some batteries. In these batteries, we use the materials I had been synthesizing as the battery’s cathode, and then subject the batteries to multiple charge-discharge cycles to evaluate their performance.

So this week, I built my first battery cell. The process was definitely time consuming and required some physical work, but it was also very rewarding, because in the end you get a battery, something very tangible. I had been synthesizing materials, so I couldn’t really see any results except through x-rays. But a battery you can actually see, touch, and test. The machine we used to test the batteries is pictured below, along with some used cells.

The cell assembly is performed on a glove box. I had never used a glove box before, so I was intrigued and excited. However, after a few minutes working on it, the excitement faded and I realized it is actually quite cumbersome, as your loose dexterity in your hands and your actions are less precise.

A few hours into learning how to assemble the battery cell in the glove box, my mentor casually tells me, “You know, you are the second girl performing this type of work in this lab. I was the first.” Her comment definitely surprised me, caught me off-guard. I started to look around me, trying to recall previous days in the lab. I realized I had in fact never seen any other women in the lab, aside from my mentor and me. There were 2 or 3 women in the computational group, so I had seen them in the office sometimes, but none of them performed experimental work on the lab. I couldn’t believe I hadn’t realized this until now. I guess I hadn’t realized it because I have unconsciously become used to it. Being a chemical engineering student, my classes and extracurriculars are usually predominantly men. I guess a lot of science still is. Nevertheless, I like to think of myself as a feminist, and not realizing I was 1 of only 2 women in the lab kind of felt like I was betraying those ideals, like I was becoming part of the problem, part of the people that live in ignorance not realizing how unequal their workplace is. The problem of inequality starts when we are blind to the fact that our workplace is unequal, when we are not conscious about it and we don’t act on it.

My thoughts were interrupted by another comment from my mentor. She was telling me she had been meaning to ask me if I would be interested on continuing research in the lab during the school year, going to the lab part-time. I quickly replied that I would love to, and our conversation continued. However, now that I think about it, I realized maybe my mentor asked me to stay precisely in that moment, and not in another time, because she, the same as me, had been taken off-guard by the conversation of there being only 2 women in the lab. Maybe she was having similar thoughts to the ones I was having, about the lack of female representation in our lab and in science in general. And maybe, extending an offer for me to stay in the lab was her way of trying to act on this, of fostering more female representation in the lab, of being part of the progress towards a more equal workplace.

So I end this blog by saying, these weeks were definitely filled with progress.